French Is NOT Spoken Here 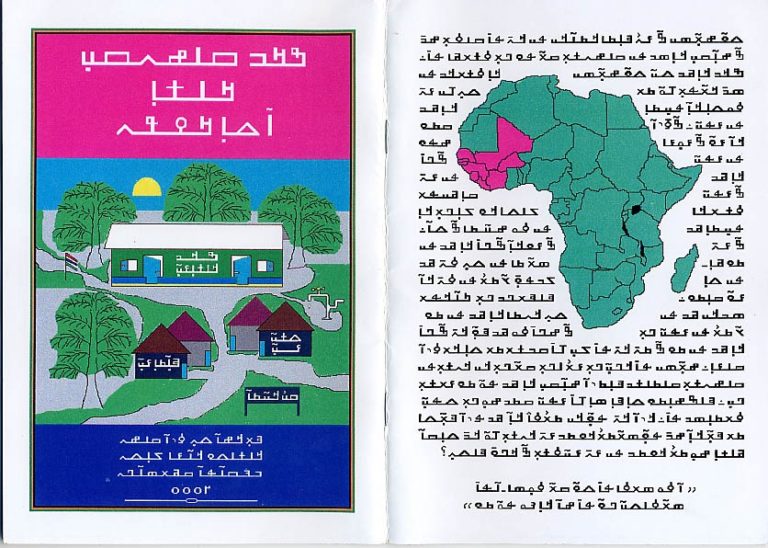 In francophone Africa, no one speaks French.

The same is true for other countries where the languages imposed by colonizers, English, Portuguese, and Spanish, have been adopted. These are official languages of most countries in sub-Saharan Africa, yet, no one speaks these languages.

Speaks, so to speak. In the country where I live, Mali, no one speaks French as their mother tongue, and very few use French for everyday communication. Yet, virtually all written communication is in French, everything from the national ID card to billboards advertising Malian milk to warnings labels on pesticides. French is not only a language that Malians learn in school, it is the language of instruction, the language that teachers, from elementary school on, use with their students, even though both teachers and students speak a different language at home.

French language is a big part of the problem. To become literate Malians must master a foreign language, a language that could not be more different than their mother tongue in pronunciation, grammar, and vocabulary. In the United States, the level of functional illiteracy is estimated to be 14%. Imagine what that would become if Chinese were to be declared the language of instruction and the sole written language. Now, imagine that, at the same time, the resources for education in the United States were about 1/100th of what they are today. That is, to a reasonable approximation, the situation of Mali today.

French is the language that divides Malians. City and country. Cosmopolitan and traditional. Rich and poor. Social class can usually be instantly determined by the level of French of an interlocutor. The elite dazzle with a sophisticated spoken and written French that would not be out of place in the chic quarters of Paris. Government officials speak in French, meetings in the Ministries are conducted entirely in French. Most native Bamako residents communicate readily in spoken French, though often with an approximate grammar and a limited vocabulary. Tradesmen, merchants, and simple workers usually manage only the bare minimum. Not many write well in French, and not a few can’t write at all. Then there are the villagers, the immense underclass that come to the city to work as guards, maids, and laborers. Producing more than a few words of French puts them into the upper reaches of that underclass. The situation is similar in other cities of Mali, though with less and less French as the importance of the city decreases. Outside of the cities, knowledge of French is not common.

Why don’t Africans learn African languages instead of the foreign languages of the colonizers? In fact, it would help alot to raise the level of literacy. The reason that is most commonly given is, in my opinion, preferred only because it originates as a key element of the apologetics of the colonizers. In the African nation states there are many languages. Mali has one dominant language, Bambara, but it has 12 other minority languages. That is actually a somewhat manageable situation. Nigeria has over 500. Using the language of the colonizer favors no one group. It keeps the peace. Just as colonial armies imposed a peace over vast geographical areas and created the nation states that exist today.

The more potent reason African countries have no choice other than to use the language of the colonizers has been … money. African languages, with a handful of exceptions, were not written until the 20th century and there is drastic dearth of pedagogical materials and all kinds of books. The francophone African island country of Madagascar has attempted to replace French-language instruction with its national language, Malagasy. Malagasy is the sole native language of Madagascar and it has been written using an Arabic-based script for several hundred years. Despite the advantageous situation of Malagasy compared to other African languages, several waves of national initiatives have failed due to the lack of resources. Trained teachers, schoolbooks, and all the other trappings of a literate society. Madagascar is able to educate a small percentage of its population in French. When it attempted to educate all of its population in Malagasy, no one was educated.

In Mali, Bambara would likely be an acceptable choice, eventually, to replace French as the national language. There are the other 12 languages, but Bambara has, nonetheless, become the lingua franca of Mali. About 80% of the population can speak it and it is used for spoken communication between different language groups in Mali more often than French. It has been written using Latin characters for about 50 years. There are a small quantity of pedagogical materials, children’s books and dictionaries available in the language. Bilingual signs in Bambara and French are not an uncommon sight. Most Malians, however, cannot readily read written Bambara. In the last few decades, basic alphabetisation in Bambara is taught in many primary schools, but it doesn’t get much emphasis since everything is written in French.

There are only about 5 million native speakers of Bambara and perhaps another 10 million second language speakers. Economics render the creation of an educational system based on Bambara improbable. There are, however, possible paths forward to making an African language a first class language of education and communication. Bambara is a member of the Manding language family. Manding languages are close enough to each other to be considered mutually intelligiable. A writing system for all Manding languages, N’ko, was created in 1949 and has attained some level of acceptance in several countries. N’ko is based on the phonology of the Manding languages. As movements to teach phonetic spelling to English-speaking children promised some years ago, alphabetisation should be far easier in N’ko than in an ill-fitting Latin script. Unlike English, there is not an enormous body of written material which already exists in the Latin script, and therefore no need to go through a second stage where the student has to learn the actual writing system in use. N’ko could potentially lead to the development of a standardized Manding language, following a trajectory akin to Swahili, a constructed standard that now has 100 million speakers. Standard Manding would have 30–40 million native-equivalent speakers, forming a language group with an economy of scale.

For the time being, an N’ko-based standard Manding and many other projects to increase literacy through the development of African languages throughout the continent, is likely to rest the dream of a modest number of visionaries. Although such projects could have dramatic long term effects on development, there are always shorter term, urgent, problems in these countries which consume the meager resources available. I do, however, see a path forward. It’s technology. I’m here in Mali to teach technology to young people because I believe: 1) it can push Africa into exponential growth that will allow it to time warp the current growth curve that has most countries reaching developed world economic levels in 75 years and, 2) it will give African nations a fighting chance to end the 400-year old era of colonial and neo-colonial exploitation and to chart their own future. I’ve been using $15 Affordable Education robot to teach computer science. We’re going to start using the $1 foldscope microscope to teach biology. Eventually, technology wins because it is cheap and cheap is what we need here. I see a lot of potential uses for artificial intelligence in Africa to advance development; promotion of African languages is one of them. Machine learning techniques are getting very, very good at translation, language understanding, and contextual analysis. They have also become cheap, found for pennies a minute in the cloud. What if AI were used to produce a Manding pedagogical system and literature from translation and synthesis of existing Manding resources? Print is expensive and books are a luxury item for most Africans. But that problem is already almost solved, with $25 tablets and internet connectivity that — still too slowly! — is reaching to every corner of the world.

OK, in the very short run such a project won’t help Google sell many Adwords — but in the long run, it will. The African economies are the El Dorado that will grow unlike anywhere else on earth. The only question is how long it will take. And that question is tied to the education of African youth, whether that education will include the tools needed to apply technology to development. It’s a bootstrapping strategy. Technology can accelerate widespread education which will accelerate application of technology for economic development.

And the French language in Africa? Don’t get me wrong, having acquired French with decades of painful effort, I’m entirely in favor of its use in Africa and everywhere else in the world where there are still civilized people who want to understand why an entrée cannot be the main dish. But in Africa, as elsewhere, its proper place is as a true second language that does not supplant learning in one’s mother tongue.

For the month of December I’m trying to kick start a permanent innovation learning center in Bamako — buying $15 robots and $1 foldscopes and paying the electric bill. https://www.globalgiving.org/projects/stem-in-africa/