I was scared the first time I came to Sub-Saharan Africa. The country where I now live, where, perhaps, my future lies, is very near the bottom of every ranking of human progess. Mali sits at 10th from the bottom on the venerable United Nations Human Development Index – in the bucket of countries with Low Human Development. A click-bait list of most dangerous countries put Mali at 3rd, Save the Children pegs Mali as the 4th worst country in the world to be a girl. Ebola, coup d’état, islamists, female genital mutilation, child soldiers, AIDS, genocide, war and famine, misery on a dantesque scale – Hello Africa! My formerly great country, languishing at 6th from the top, has a nominal per capita GDP of $56,000, Mali’s is 1/80th of that, $700. As my plane descended on Bamako my gut tightened as I imagined the scenes of horror I might encounter, the begging, the misery, the corruption, the insecurity.

I have not encountered scenes of horror, though the difference in economic development between where I came from and where I am now is real. Some might be shocked by the difference, but having been throughly mediatized to expect the worst my first impressions were more positive than not. Here is first thing you don’t know about Africa: life here is mostly “normal”. Normal, as in a large portion of the population goes to work every day, feels stressed on the job, has a home they are proud of, loves their children, worries about their future, and sacrifices enormously for their education, enjoys time with family, looks forward to holidays, spends a lot of time in traffic jams, discusses politics, watches many of the same television shows as people in Lincoln, Nebraska (though they have a vastly more international menu of choices), and are constantly staring at their smartphone screens. Yes, there are a lot more poor people and, yes, the absolute economic level of both well-to-do and poor is considerably below the respective categories in the high development countries. I live in the capital which has basic services (electricity, water, phone coverage, hospitals, police, public transportation); elsewhere in the country, such services can be rare. Many people have truly hard lives here – one witnesses this every single day. But the vast majority of people get by, and, for many, there is a normalcy to life that does not differ greatly from normal in Lincoln.

Mali is “normal” in other ways you don’t know. It’s a fiercely democratic, secular country. The press is diverse, active, and, extremely critical of the powers that be. It’s a country with a large muslim majority – a deeply religious one at that – which has never deviated from the complete and unequivocable practice of freedom of religion and tolerance. It is a country of laws which follows international standards in labor, protection of children, women’s rights, and individual liberty. Yes, there are violations of those laws and areas where enforcement may be lax. Many, in government and outside it, are working to improve these situations. There certainly must be corruption – there is corruption everywhere – but bribery, at least, is not an integral part of daily life here.

The thing that you have never imagined is that an African country can have 1/80 of your per capita income but be better than you in some very significant areas: preservation of the extended family, national pride, a sense of national purpose, social solidarity, and a belief in the future of the country and a determination to work together to make that future bright. Malians organize, there are a multitude of associations working to solve problems and build a better country. For example, Mali is the only country I know of that has formed a “Parliament of Children”, an official body representing all the regions of the country where the children themselves have a national platform to talk about their problems. In Mali, I feel more hope in the future than I did my own rich but fractured country that seems to have lost social cohesion, sense of purpose, gratitude for its gifts and … humility.

When I left the life I had known in Silicon Valley to come to Mali I wrote a blog that explained why I believed it was time for me to move on other things. I promised to answer later, Why Africa? Here is my answer. The African continent is growing at a much higher rate than anywhere else in the world and this will continue for a long time. There is everything to do here. There are real needs, everywhere, and the opportunity to build things that will profoundly enrich countless lives – not just momentarily distract the already over-satiated. The Africans are ready. You may think that they are not because they are starting with an 80X deficit and you don’t see the progress, only the overwhelming problems. You definitely don’t see the numbers of capable people Africa is producing now with the determination to seize the opportunity. They are here.

It will not be easy for Africans to eliminate an 80X deficit. But the deficit is in infrastructure, not in individual attainment. While education has a cost, knowledge is free and there is no insurmountable barrier that prevents a kid in Africa today from acquiring the same intellectual tools as a kid in the US. I’ve taught talented kids in the heart of Silicon Valley and I’ve taught kids in Bamako. The ability to learn is the same, but the African kids have the advantage in motivation. Education is the one area where a small investment early on yields a lifetime of elevated productivity. How small an investment can make a significant impact? Let me give an example. I used the Affordable Educaton Robot (AERobot), designed for Africa, as a tool to teach programming, robotics, electronics, and physics here in Bamako – with great success. What is the number one thing that makes it an “African robot”? Cost. $15. It does everything I need a robot to do to teach computer science at any level of depth and rigor, it moves by vibration motors, is programmable with C and a visual block language, has infrared and visibile light sensors, and can blink its LEDs. Yes, it would be nice if, as in Silicon Valley, each kid had a tablet computer and a robot equipped with servomotor actuators … but my $15 robot is enough to allow me to give my students the same hands-on experience with technology as the kids in an environment with 80 times the resources. 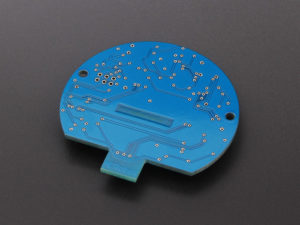 The last thing that you don’t know is that it is fun and exciting to be here. I’m sharing things I learned in Silicon Valley because I believe they will be useful here. It is deeply appreciated. I don’t believe, ultimately, Africans are going to create Silicon Valley’s imitation, “Silicon Savannahs”. It will be … something else … I’m curious to see what. I’m hopeful that it will integrate the great strength of African culture, social solidarity, showing us a less fractious path forward for humanity.